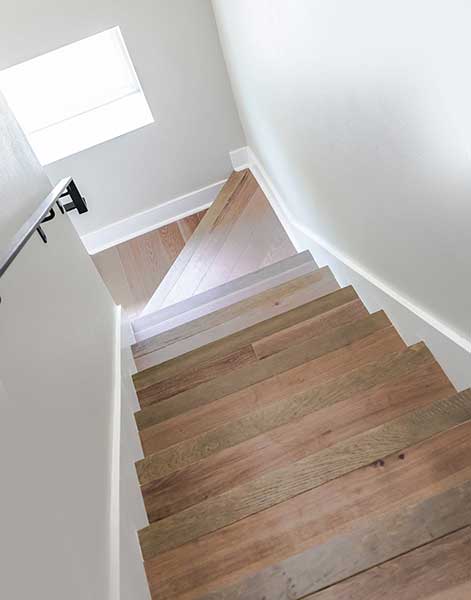 Stairs see a lot of traffic, and that traffic is unique because it leads to more wear due to pivoting, running, and feet rolling over the edge of the stairs – especially if you have kids.  Keeping stairs clean can lead to a better appearance of carpeting, due to less rub-in.  The more dirt an area has the more likely it is to pick up humidity over time, and saturate the area as pressure and foot traffic grinds it in.

Spot treating small stains is great, but don’t forget those spots are wet, often for 24 hours or more.  It’s great to cover the wet places after cleaning with a paper towel to mark the area to be walked around, and to cover it for awkward steps.  The paper towel also somewhat bridges over the dampness due to the roll bend – so it can allow a bit more air to the area than, for example, if you place a rag or magazine on the same area.

Vacuuming is good, but it hardly gets to the edge of the stair case on it’s own.  Getting a small handheld vacuum can really help, but it must have powerful enough suction or it will lead to a poor job, or frustration with chasing bits of dirt around.  If you buy a small vacuum for that purpose, read the reviews – some vacuums loose suction when they are even 1/3 full, and some have under-powered motors to begin with.

Starting at the top of the staircase and going down can be easier, as your arm is always tracking downward.  Things seem to move faster this way, than if you start low and move high.  Oddly enough, most of us have the instinct to start low, since we typically begin at the bottom of the stairs.  Walking up to the top might not be the first impulse, but it just makes cleaning stairs less of a pain!

For hardwood stairs, getting the surface cleaned well might take a couple applications of effort.  It can work better to vacuum first, then use a damp rag, then use a wood conditioner.  However, it’s good to bypass the high sheen in favor of maintaining a stair surface that has adequate grip for the feet.  There’s likely been more than one instance of an over-polished staircase meeting a pair of fresh socks, leading to a slip and fall.

When cleaning stairs outdoors, the awareness of surface is especially important.  Power washing concrete can get tiresome, leading to the desire to apply a sealant.  All sealants are not created as well as others however.  It’s very important to make sure to find an all-weather sealant that remains grip-y to shoes, feet, and cheap sandals whether there’s rain, snow, or sitting water on the stairs.  Some sealants become dangerously slippery in these conditions, and they were either poorly designed, or not intended to seal concrete at all.

Some people like vacuuming more than other chores around the house.  This might seem obvious, but taking on a chore you like better while delegating the stairs sweeping might be a great idea.  Believe it or not, there are people who vacuum their house nearly every day!  That’s a lot of cleaning, but it gives some people peace of mind.  For the rest of us… well, there’s Lexi Maids!